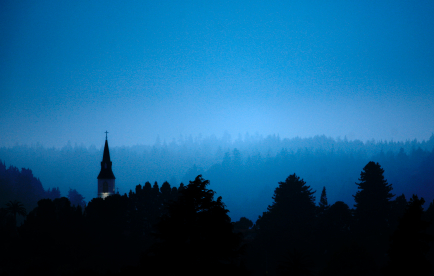 The Reverend Forrest Church died of esophageal cancer last week at the much-too-young age of 61.

His life story continues to speak to us.

Church began his ministerial career preaching the gospel of rational belief—the kind of gospel that limits itself to teachings the human mind can comprehend and experience can confirm.  He surveyed the theological field for its various doctrines and claims about God and laid them on a dissecting table so he could cut them open and discover how they worked.  Did they meet the constraints of rationality?  If no, he’d toss them in the waste bin. If yes, he’d add them to his keeper pile.  This approach challenged him intellectually but left him spiritually dry.

He studied God, but God was absent to him.

He turned to alcohol and used it as a buffer against his emptiness.  The drinking worked—for many years, anyway.  He managed to drink and juggle his hefty duties as senior minister of All Souls Unitarian Universalist Church in Manhattan.  He even managed to write several books.

In the late 1980’s, he realized that he needed God’s help to find peace.  Not at home in himself, he began to look for a home in the universe while still sharing the common Unitarian aversion to God-language.  He’d kept his altar crowded with “icons to knowledge” but now he cleared a space for mystery.  While most of his beliefs had not changed, he declared that religion was a human response to the inevitability of death.  This inevitability gave meaning to human love because the more love we found and gave, the more we risked losing.

Eventually, he embraced God-language and used it more readily than his co-religionists liked.  But how could he keep the saving news to himself?   He’d found God and God filled the God-shaped hole he’d harbored and denied for much too long.  God, he proclaimed, was “that which is greater than all and yet present in each.”

He loved God, and God was present to him.

The Universalist strand of his faith tradition, with its promise of shared salvation, held particular appeal for Church, especially when integrated with Emersonian transcendentalism.  Christian became an important part of his religious identity and he adopted the label of Christian Universalist.  As such, he made room in his theology for many religious approaches.  The cathedral of the world became his credo—while there was a single Reality or Truth (God), this reality shone through the many windows of the world’s cathedral.  The windows’ patterns refracted the light into multiple patterns suggesting different meanings.  One Light, many patterns.  One Truth, many meanings.

Church often said that God was “the most famous liberal of all time.”  Every word that describes God is a synonym for liberal, he explained:  “God is munificent and openhanded.  The creation is ample and plenteous.  As healer and comforter, God is charitable and benevolent.  As our redeemer, God is generous and forgiving…God has a bleeding that simply never stops.”

1 thought on “#36 The luminous gospel of transcendental universalism”