Heading toward the final days of the year, the weather turning resolutely nasty, temperatures dipping into the single digits, snow threatening to clog side streets and motorways, ice making commuting a dangerous sport, the sun setting earlier every afternoon, adding the burden of ever shorter and drearier days—Christmas lights suddenly pop up everywhere.

The long autumn darkness that weighed on our spirits becomes the backdrop for bright lights in every shade on the color wheel.

In December, lights blink and twinkle and shimmer, bringing us cheer when the work day ends and we are released into the night. No more mood-dampening darkness; we are bedazzled by trees and bushes festooned with tiny electric stars, street poles decorated with shiny rows of candy-cane red and white, edges of balconies and eaves of houses dripping with brilliant icicles.

When these Christmas lights are taken down in January and placed in storage for another year, the solstice will have passed. The worst will be over and the loveliness of spring will feel within reach. The sky will be lighter when we leave work, and though the winter-weather will worsen, snow will fall more often, temperatures will stay in single digits, the early months of the year, with their gradually lengthening days, will be bearable. 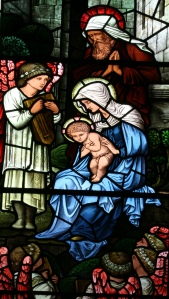 For Christians, the birth of Jesus symbolizes the in-breaking of God’s love, just as it did among an ancient people who, too long trapped in the harshness of Roman domination and the nightmare of the tyrant Herod’s oppression, despaired of goodness and hope.

Many of the Israelites, when love broke into their midst, knew only the life of the subjugated, under the battering ram of a colonial power determined to control them physically and to mould their thoughts, their beliefs, and their ideals. Spirit-crushing poverty was the order of the day, unrelenting misery that we, Westerners, can try to imagine today but which we must fail to understand.

An ethos of meaningless brutality ruled from birth to death. And yet love could not be stopped.

Love that, in the narrative of Jesus’ birth, came in the form of a child, a child who appeared, not at an expected or convenient time, not to a middle-class or settled family.

Love broke through the sordid and violent times of domination in the form of a mother’s love for her child—a love beyond the reach of the most powerful empire the world had yet known.

Love, this story reminds us, can come any time, unbidden, unexpected, and without regard for whether we are ready.

Love this pure, this selfless, this strong, is rare. It is surely the most prized gift in anyone’s life.

Love, in this story, also appears in the more-complex love of a stepfather for his child. Because Joseph’s eyes, like Mary’s, shine with love as he gazes at the newborn Jesus.

Whether we are Christians or not, blessed light buoys us during these days of dreariness. And blessed love cradles us during days of trial (whether we are the bearer of love or its object).

During this season of light and love, or during any season, may love break into your life like the lights of Christmas. And may you, like the light, be an in-breaking source of love to others.