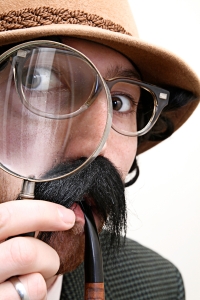 Because they’re driven to find a few good answers, enquiring readers engage texts actively, whether that text is religious or otherwise.  Pencil in hand, they ask tough questions, follow arguments closely (looking for gaps), and watch for hidden claims and assumptions.  They interrogate texts much like a police officer interrogates a witness.

And in fact, books about religious matters are witnesses—to their authors’ points of view.

To get the most out of the investigative process, consider asking the following questions when you read religious texts (this list was drawn from a book by Alister McGrath):

All writers bring to the page their personal experiences, existential questions, faith commitments, world-views, cultural assumptions, concerns, and agendas.  All of these factors shape an author’s writing, whether he is aware of their influence or not.  That’s why it’s important to learn something about the writer’s background.

2. For whom was the text written?

Most texts were written for specific readers.  Authors make assumptions about their readers’ shared knowledge, questions, and interests.  Trying to understand the audience for which a given text was written is especially important if you don’t belong to that audience.  In this case, you’ll have to make an extra effort to interpret the text—translating the unfamiliar into something familiar to you.

3. What is the historical and cultural context of the text?

Writers live in particular places at particular times in history.  They were shaped by the historical and cultural forces to which they’re subject, and their audiences were, too.  A work about God and evil may approach its subjects differently if it was written before World War II than if it was written afterwards.  Again, interpretation is required to understand how the issues the writer discusses are relevant to your own (contemporary) situation.

4. What religious imagery does the text employ?

Many authors rely on imagery from their faith traditions’ sacred texts.  A reference to a journey across the wilderness in a Jewish or Christian work might be elaborated upon by the writer, but she may also simply expect you to pick up on the allusion to the Biblical book of Exodus.  Be alert for such images since they are intended to enrich and deepen the impact of the written word.

5. What does the writer want you to think?

Writers have goals.  One writer may seek to persuade you of the importance of moving from an agnostic point of view to a theistic one; another might want to demonstrate the superiority of Buddhist meditation practices.  Try to identify those opinions a writer hopes you will adopt as a result of reading his work.  Some use rhetorical techniques like “Watch out, God condemns atheists to hell;” others use reasoned arguments—there are a variety of techniques authors use to sway their readers.

6. What does the writer want you to do?

Many writers want you to change what you do.  If they want to convince you to move from an agnostic point of view to a theistic one, they may recommend specific prayers to help you enter into relationship with God.  If they want to convince you of the superiority of Buddhist meditation practices, they may encourage you to incorporate such practices into your daily routine.  Try to identify what the writer wishes you to do differently.

7. What can you take away from your engagement with the text?

Consider what you learn (not necessarily new knowledge) from what you’ve read.  Did the book or passage help you?  Did it make you angry?  Did it encourage you?  Did it lead you to reconsider a cherished position?

So that you might not be left scrambling to find a passage on which to try these questions, one is provided below.  The author of this excerpt is the Lithuanian-French Jewish philosopher, Emmanuel Levinas (1906-1995).  During WWII, Levinas served in the French military but his brothers and father were murdered in Lithuania by the Nazi SS.  His philosophical work focuses on ethics—for him, ethics is a fundamental part of our experience when we encounter another human being face-to-face.  This passage comes from the published transcript of a lecture he gave at a colloquium in 1970 on “The Youth of Israel.”  In this lecture, he discussed two passages from the Talmud (Tractate Nazir—pp. 66a and 66b):

Saying Grace in the Third World

Saying grace would be an act of the greatest importance.  To be able to eat and drink is a possibility as extraordinary, as miraculous, as the crossing of the Red Sea.  We do not recognize the miracle this represents because we live in a Europe which, for the moment, has plenty of everything, and not in a Third World country, and because our memory is short.  There they understand that to be able to satisfy one’s hunger is the marvel of marvels.  To return to a stage of indigence in Europe, despite all the progress of civilization, is a most natural possibility for us, as the war years and the concentration camps have shown.  In fact, the route which takes bread from the earth in which it grows to the mouth which eats it is one of the most perilous.  It is to cross the Red Sea.  An old Midrash, conceived in this spirit, teaches:  “Each drop of the rain which is to water your furrows is led by 10,000 angels so that it may reach its destination.”  Nothing is as difficult as being able to feed oneself!  So that the verse “You will eat and be full and you will bless” (Deuteronomy 8:10) is not pious verbiage but the recognition of a daily miracle and of the gratitude it must produce in our souls.