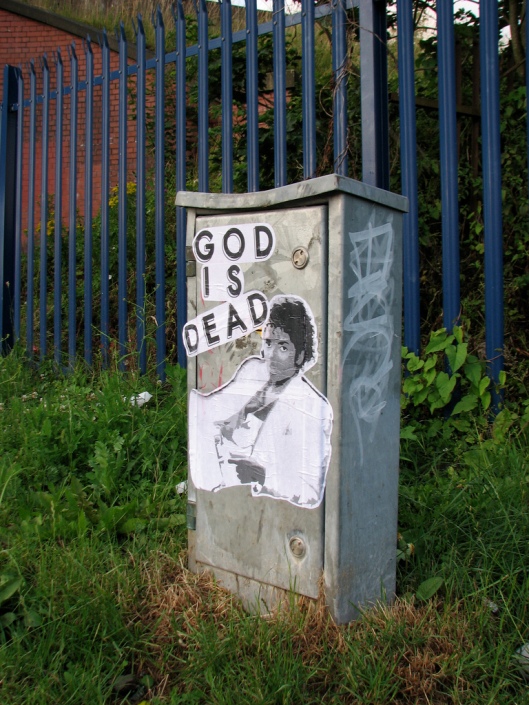 Many in the West associate the “Death of God” with the 19th Century philosopher, Friedrich Nietzsche. Some are also aware of the 1960s death-of-God movement (more accurately called the wish-God-was-dead movement?) led by theologians like Thomas J. J. Altizer. The death of God, though it may seem recent, is an ancient phenomenon. Humankind has, in fact, killed God many times.

The 20th Century historian of religions, Mircea Eliade, describes the age of Nietzsche as a time when Western scholars were obsessed with the “origin and development” of almost everything. Biologists dreamt of finding the origin of life, geologists wanted to find the beginning of the earth; astronomers looked for the starting-point of the universe, etc.

In line with this search, author Andrew Lang wrote The Making of Religion in 1898. In his monograph, Lang debunked the view of his contemporary, the anthropologist E. B. Tylor, that animism was the first stage of religion.

Lang based on his conclusion on the religions of ancient, indigenous peoples living in Australia and in the Andaman Islands. Among them, Lang found neither ancestor-worship nor nature cults as Tylor would have expected. Instead, those peoples worshipped a single, powerful and creative High God leading Lang to postulate that a belief in a High God pre-dated animism.

Lang also discovered that belief in high Gods is rare among indigenous people and that the religious practices that develop around those Gods are “rather poor.” Indeed, he wrote, the role of the High Gods in the religious lives of their followers is “very modest.”

In addition, Lang noticed that, among some peoples, the High God became, in Eliade’s words, deus otiosus, or “Unemployed.” Because God seemed indifferent to human affairs, his followers decided that God had left for the highest heaven.

Cut off from daily life and thus, for all practical purposes, irrelevant, the High God was eventually forgotten. In other words, God died. God faded away, and Lang found, disappeared from religious practice, and eventually from myths.

When Nietzsche announced the end of religion, he prophesied that Westerners, having killed God through disinterest and neglect would, henceforth, live in an immanent, godless world. Had Lang read Nietzsche who, twenty years earlier, had proclaimed, through his mouthpiece of Zarathustra, the death of God? Eliade did not think so. Though Lang did not understand the significance of his discovery, according to Eliade, he detected the deaths of High Gods.

Today’s liberal religionists are often half-hearted believers. Their High Gods play a “very modest” role in their lives; they are mostly relegated to a heaven far far away. Worship around those Gods is “rather poor;” sometimes limited to Thoreau-like nature-walks, sometimes nonexistent.

There is tension in such worship.

On the one hand, lightly-held High Gods ought to be applauded if not embraced; those who believe in them never kill or wound or maim or willfully cause suffering in their name. They are often people who lead good, humane lives.

On the other hand, lightly-held high Gods, according to Lang, are ever on the cusp of slipping into oblivion, pushed into realms so distant from the concerns of peoples and people that they disappear from human memory forever.

In other words, these High Gods sit on the razor’s edge of existence. Their precarious nature may explain a puzzling reaction by those with High Gods who play stronger roles in the lives of their worshippers.

Many liberal religionists with nearly-unemployed high Gods are the targets of derision and mockery—for example, Lutheran Garrison Keillor’s frequent jokes on “Prairie Home Companion” about Unitarian Universalists known for welcoming agnostics, atheists, non-theists, and religious skeptics into their congregations.

Why should atheists or agnostics—still relatively rare—turn thin-skinned Theists like Keillor into head-shakers and finger-waggers? More problematic, of course—in some countries atheists and agnostics, though generally harmless and of reasonable moral caliber, are singled out for special punishment or execution. Perhaps because the logical step after agnosticism and skepticism is deus otiosus. Behind the jokes and killing lies fear of the death of God.

This fear is quite understandable. Because, it’s true, agnostics and skeptics sometimes have little comfort to offer to victims of tragedy and suffering. They may advance this bit of advice: your “community” will stand with you. Hmm. Really?

Will “community” be there after the death of your beloved child? “Community” is made up of people with problems and demands and children of their own. The High God, even if nearly unemployed, has no distractions and may walk with you through the months and years of weeping and sorrow. Will “community” be there in the wee hours of the night when cancer is chewing on your bones? The High God, unlike “community,” may be available any time, anywhere.

Among non-Western peoples, the retirement of the High God to the highest heaven, ethnologist Wilhelm Schmidt noted, usually gives rise to a more vivid, more dramatic pantheon of what Eliade called “inferior gods.” According to Schmidt, when human beings forgot their High God, they became involved, on Eliade’s retelling, “in more and more complicated beliefs in a multitude of gods and goddesses, ghosts, mystical ancestors, and so on.” [3]

In the post-God world imagined by Nietzsche, individuals are left alone to fend for themselves as they shoulder life’s soul-breaking tragedies and unavoidable suffering. No wonder most people seek replacement objects of devotion after their High God fades into oblivion.

Ralph Waldo Emerson, a 19th Century Unitarian whose writings were greatly loved by Nietzsche [4], issued this warning: “A person will worship something—have no doubt that that.” Emerson also wrote, “We may think our tribute is paid in secret in the dark recesses of our hearts—but it will out.”

Still, fear of believers in “very modest” high Gods does not justify cynicism, shunning, oppression, or murder. Even when agnostics and skeptics justify this fear by breaking the pattern described by Schmitt and Emerson and, resisting the urge to find new gods to worship, they simply let God die.