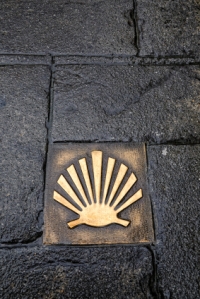 No longer content to hike the Appalachian trail or climb Denali, devout secularists have turned their sights on pilgrim routes.  One such route is the Way of St. James which wends through rugged French terrain, up and over the Pyrenees, and across the desolate plains of Northern Spain until it reaches the city of Santiago, just short of the Atlantic coast that ancients believed to be the edge of the world.  The Way now attracts a great deal of attention not just from pilgrims but from such challenge-seekers.  Anxious to share the good news of this difficult, but achievable journey, some return home and write guides to assist their fellow non-pilgrims.  So what?  So this:  some of these writers, anxious to underscore their secular motivations, betray in their travelogues their distaste for religious piety.

Such is the viewpoint of Conrad Rudolph, Professor of Medieval Art at the University of California Riverside.  In Pilgrimage to the End of the World, his book about hiking the Way of St. James, he repeatedly reminds the reader that he is most definitely “not a believer in miracles or the otherworldly.”  The book’s very title serves as Rudolph’s first disclaimer.  A bona fide pilgrim undertakes the journey to reach the Spanish city of Santiago de Compostela because its Cathedral is reputed to house the remains of Jesus’ disciple, Saint James the Greater.  Rudolph, seemingly worried that he’ll be mistaken for a religious pilgrim, signals, in his title, that the real goal of his pilgrimage was not the purported relics of St. James but the Atlantic Ocean, the “End of the World,” which is three days further on foot.  No wonder then, that when Rudolph reaches Santiago, traditionally the “emotional high point” of the journey, he describes his arrival as “fun but not emotional.”

And so we have the novel phenomenon of pilgrimages undertaken by secularists, so embarrassed by the religious trappings of their journeys that they feel compelled to trumpet their lack of faith.

Rudolph defends his decision to hike The Way by explaining that he is merely following the ancient tradition of the “curious” onlooker.  According to him, even in Medieval times, “many were highly curious about the world around them.”  Apparently, this condition was so widespread that it was common for condemnations to be issued against those who made pilgrimages merely for reasons of “curiosity.”

Okay, point taken.  Except that Rudolph’s curiosity never extends to wondering what it might be (or have been) like for pilgrims to undertake the journey to Santiago out of faith.  Indeed, most pilgrims, are not “inveterate hikers” like Rudolph and so they, like their Medieval forebears, likely endure greater suffering as they negotiate rough terrain with heavy backpacks.  What motivates them to keep going day after day?  How does their faith sustain them when they are ailing, hurting and still weeks from reaching their goal?  If Rudolph asked these questions of pilgrims he met along the way, he does not share the answers in his book.

The Way of St. James was especially popular during the Middle Ages.  It attracted many pilgrims from France but pilgrims also set out from Germany, Poland, Hungary, Slovenia, Croatia, the eastern Austrian domains, and Slovakia.  Before they could officially begin their treks, they first had to reach the town of Le Puy in France’s Massif Central.  Then, braving bandits, persistent hunger, unpredictable weather, and ankle-busting paths, they set off to walk the thousand miles to Santiago.  There’s every reason to suspect that the roundtrip journey would have lasted six months since Medieval pilgrims covered, on average, about 15 miles a day.  While they belonged to all social classes, most pilgrims were penniless agrarians, serfs who set out for Santiago after becoming too broken down to provide useful labor to their masters or freeholders who “were better off in theory only.”  Although poverty-stricken and often in ill health, tens of thousands set off on pilgrimage every year.

Why did these Medieval serfs and freeholders choose to undertake this journey?  According to William Melczer, a Medieval scholar, they had many reasons.  Pious love for St. James was the most common.  Some went simply to pray.  Others wanted forgiveness for a laundry-list of minor transgressions.  Many used the journey as penance to atone for particularly soul-searing sins.  Still others made their way to plead for better health and relief from pain.  Their spirits were open to God and they had faith.  How often they must have prayed, especially when they looked at the path ahead, knowing full well that having overcome one challenge, they would reach another.  They rarely had enough food, often they had only pathetic shelter.  Somehow, though, every morning, they found fresh courage and set off anew in spite of the hardships they had already endured and in spite of the hardships that awaited them.

Interestingly, theologians have discouraged pilgrimages.  Church Doctors like Augustine railed against them.  In his opinion they were “pointless” because the holy cannot “be localized in any given place.”  And since the holy is everywhere, it follows that the holy is not found in extra measure in places where sacred relics are housed.  No matter.  For hundreds of years, pilgrims have ignored these theological directives.  They know that when life follows its regular rhythms, the holy, though everywhere present, is easy to ignore.  So they walk to be with God.  During a thousand miles of contemplation, the holy is close—as close as one’s breath.

Why did Rudolph undertake this journey?  He’s quite unclear on that score, fuzzy even.  He writes about wandering through the early dawn light along a mountain ridge in northwestern Spain where the wind rustled the grass, the sun sparkled, and sheep bells sounded faintly from far off vales.  His language is evocative and lovely, his prose pleasant.  From time to time, he invokes the language of magic, saying “it was almost as if a spell had been cast.”  Perhaps afraid of venturing into intellectually indefensible territory, he changes his mind and rejects magic, writing that, after all, “experiences like these can happen anywhere.”  And then, he recants, explaining that, unlike walking Appalachian trail or hiking Denali, there is a special pay-off to pilgrimages because these experiences “don’t often happen with either the regularity or the strength that they did on the pilgrimage, where every day is an adventure…”  Hmmm, not sure most hikers would agree.

In the end, Rudolph shifts gears again.  It is not the “almost-magic” quality of his experiences, he decides, but the people he meets who made the journey a special event.  The people are, he recalls, “almost consistently as interested in what you’re doing as you are yourself.”

People were consistently interested in what Rudolph was doing because they assumed that he was travelling to Santiago out of deeply-felt, religious convictions.  Although a hiker, he decided to wear a clamshell tied to a cord around his neck.  The clamshell is the symbol of St. James.  By wearing it, Rudolph styled himself as a pilgrim.  It placed him, he admits, in a “special group…worthy of immediate public informality, warmth, and help, no questions asked.”  He recounts how, in a small mountain village, two old women “bless” him when they learn he is a pilgrim.  Even more notable, he says, are those who ask him “to pray for them; one horribly desperate man clearly needing it, or something, very badly.”

For unfathomable reasons, Rudolph accepts those prayer requests.  Sort of.  After he arrives in Santiago and enters St. James Cathedral, he explains (with a clear conscience) that, “no,” he didn’t pray for the “horribly desperate man.”  Nor did he pray “for any of the others who had asked [him] along the way to pray for them.”  It is enough, he decides, to “think about them” as he stands in the transept.  How lame is that?  Would the “horribly desperate man” agree with him or would he hope that even a hiker like Rudolph would, upon reaching the Cathedral at the end of the road, drop his pride, bend his knees, and pray?

These, then, are some of the quandaries you will face if you are a devoutly-secular hiker interested in hiking the Way of St. James or some other pilgrimage route.  Why choose this option instead of a hike through one of America’s or Europe’s fine national parks?  Will you wear the pilgrim’s badge?  Will you accept the kindness of strangers even when you realize they offer it because they mistake you for a pilgrim?  Will you accept prayer requests?  Will you honor those requests?  How?

Whatever you decide, you will be just as welcome on the pilgrim routes as you would have been in Medieval times.  To close, here are some verses from “La Pretiosa,” a 12th Century hymn about a hospice for pilgrims on the road to Santiago.  Other stanzas describe how monks would wash the feet, cut the hair, and trim the beards of male pilgrims—services you are, sad to say, unlikely to find today.

Its doors open to the sick and well,

to Catholics as well as to pagans,

Jews, heretics, beggars, and the indigent,